The Attendance App
Skip to content
Image Source: Freepik
The storage of people’s digital images has become an essential part of our lives. As the technology that makes this possible continues to improve, adoption among different populations will grow.
Similarly, most people are aware of the benefits of being able to keep tabs on their loved ones without alerting them to every movement. The ability to do this not only prevents potential harm but also increases the likelihood of successful reunions.
This is especially true when it comes to adoption of facial recognition technology – world over. While some countries are slow to adopt new technologies, others take them a few steps too far by implementing measures which hinder adoption.
For example, China has made it difficult for companies and service providers wanting to use AI and other advanced technologies, such as voice recognition and face detection software.
Surveys conducted by Smith (2019) at Pew Research, the Center for Data Innovation and the Ada Lovelace Institute (2019) looked into people’s trust in law enforcement agencies using FRT.
Sovantharith Seng, Mahdi Nasrullah Al-Ameen, and Matthew Wright found a major gap in understanding people’s perceptions of the use of FR in everyday life. So, Sovantharithet al published their survey findings in paper‘ A First Look into Users’ Perceptions of Facial Recognition in the Physical World’
Their analysis revealed a mix of concerns and hope about this technology. Participants have a clear idea about their preferences for Face Recognition Tech-based identification, authentication, tracking, and services & they reported their individuality& autonomy be compromised without consent.
In the survey participants reported about perceived benefits with various use cases too. For example:
The researchers after the survey opined that the use cases be considered individually in context whetted by government agencies. However, today, as we see ahead with support from governments and organizations worldwide, adoption have increased steadily day by day with more unique cases. 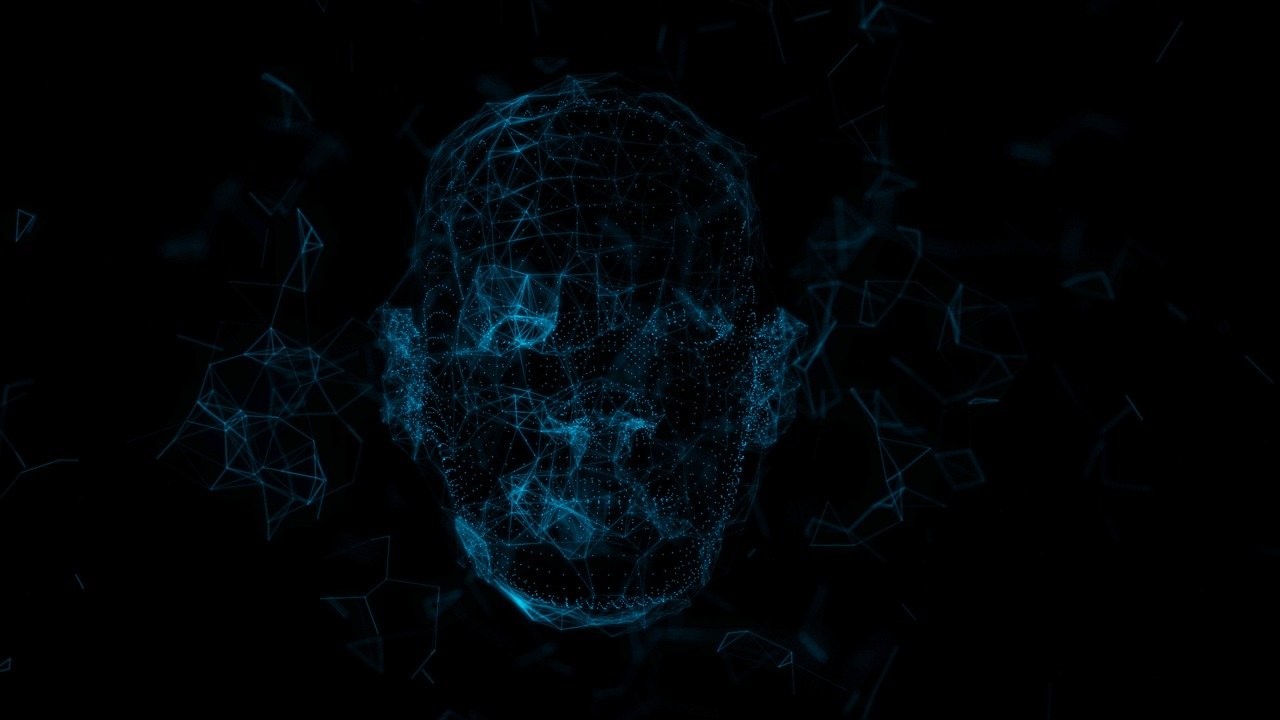 What is facial recognition technology?
Facial recognition technology is an AI system that uses digital photos, videos and other visual content to create a high-quality image of a person.
The technology can be used to identify individuals and verify identities at stores, restaurants, airports, and other public places. It can also be used to provide security at facilities, like Guest Centres and theme parks. 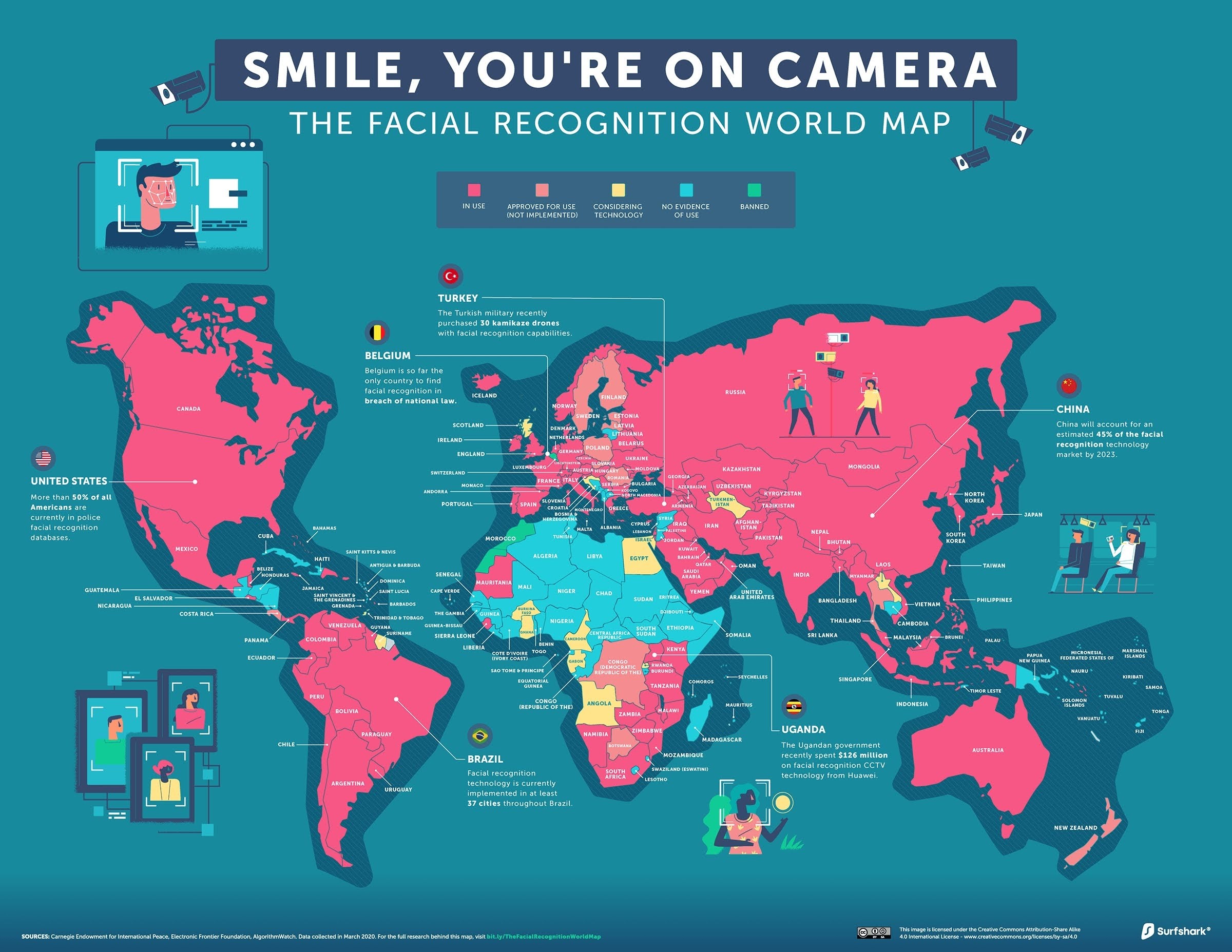 As facial recognition technology develops, it will become more widespread in the world. China is the dominant market for facial recognition software, but it is also the most restrictive.
Japan and South Korea have also made strides in adoption. Currently, facial recognition exists only in a software form, but researchers are working to scale the technology up for use in live-action.
All the buses in Kazakistan, Face will be treated as ticket.
Adoption in Europe: 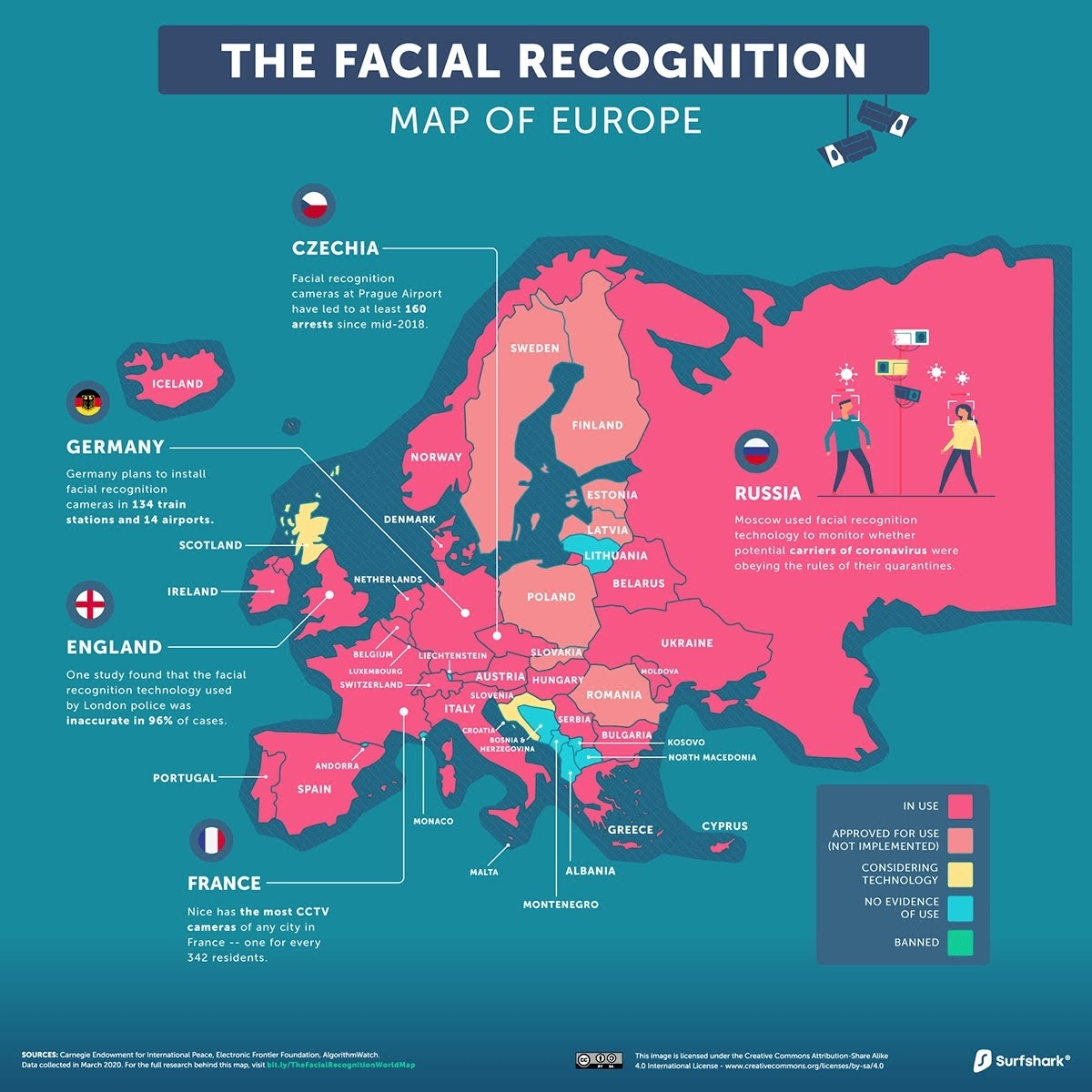 Image: Surfshark
According tohttps://www.biometricupdate.com/202205Two new reports in EU aim to establish the status quo of the use of facial recognition in Europe in public places and by law enforcement.
These reports seek to explore the nuances of the technology and its application, one report is to guidance to inform European lawmakers and another report is to bring more examples and uses cases.
There are calls for the AI Act to ban the technology for remote identification in public places, while analysis by the Ada Lovelace Institute suggests that any ban could in fact reduce protections against biometric surveillance.
In 2005 the first edition of Prüm was signed by seven European countries—Belgium, Germany, Spain, France, Luxembourg, the Netherlands, and Austria and it allowed nations to share data to tackle international crime.
Other European countries like Russia used Facial recognition technology for Covid’s quarantine breaches while Turkey is using FRT in drones,
In the UK, schools are using the technology to make lunch lines faster; in Moscow, “Face Pay” now allows you to ride the subway (https://www.jtl.columbia.edu/bulletin-blog)
But even with so much apprehension, 26European countries still use it
China’s stance on AI
One of the most vocal proponents of AI and facial recognition technology is China. The country has actively worked to create a regime that provides favorable regulatory environments for AI and other advanced technologies.
It has also taken steps to ensure that the industry is not misused. For example, the requirement that facial recognition technology be used “for legitimate purposes” has been broadened to include law enforcement and public security.
Furthermore, the standardization of face recognition technology across the country has created a more consistent standard of digital identification across the nation. 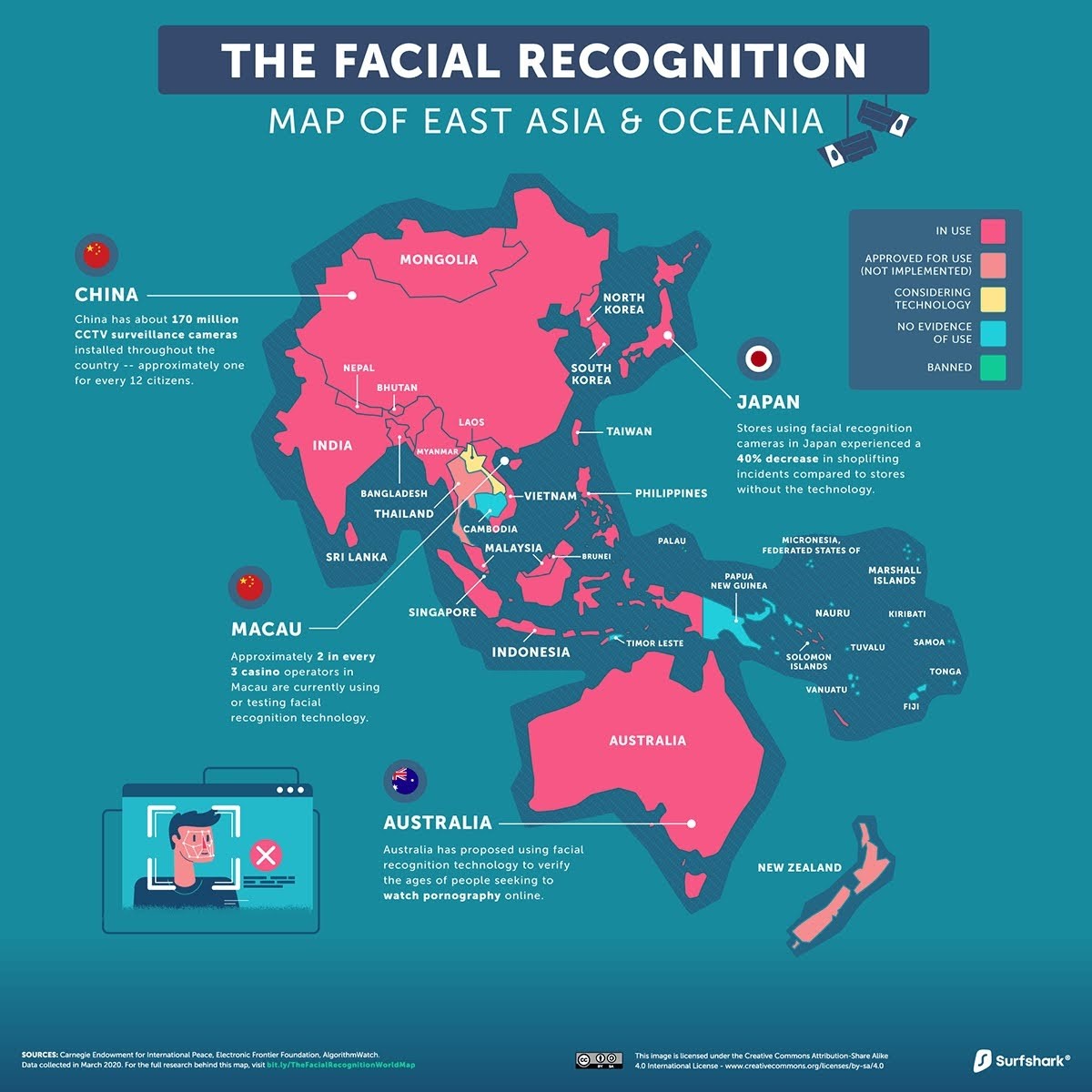 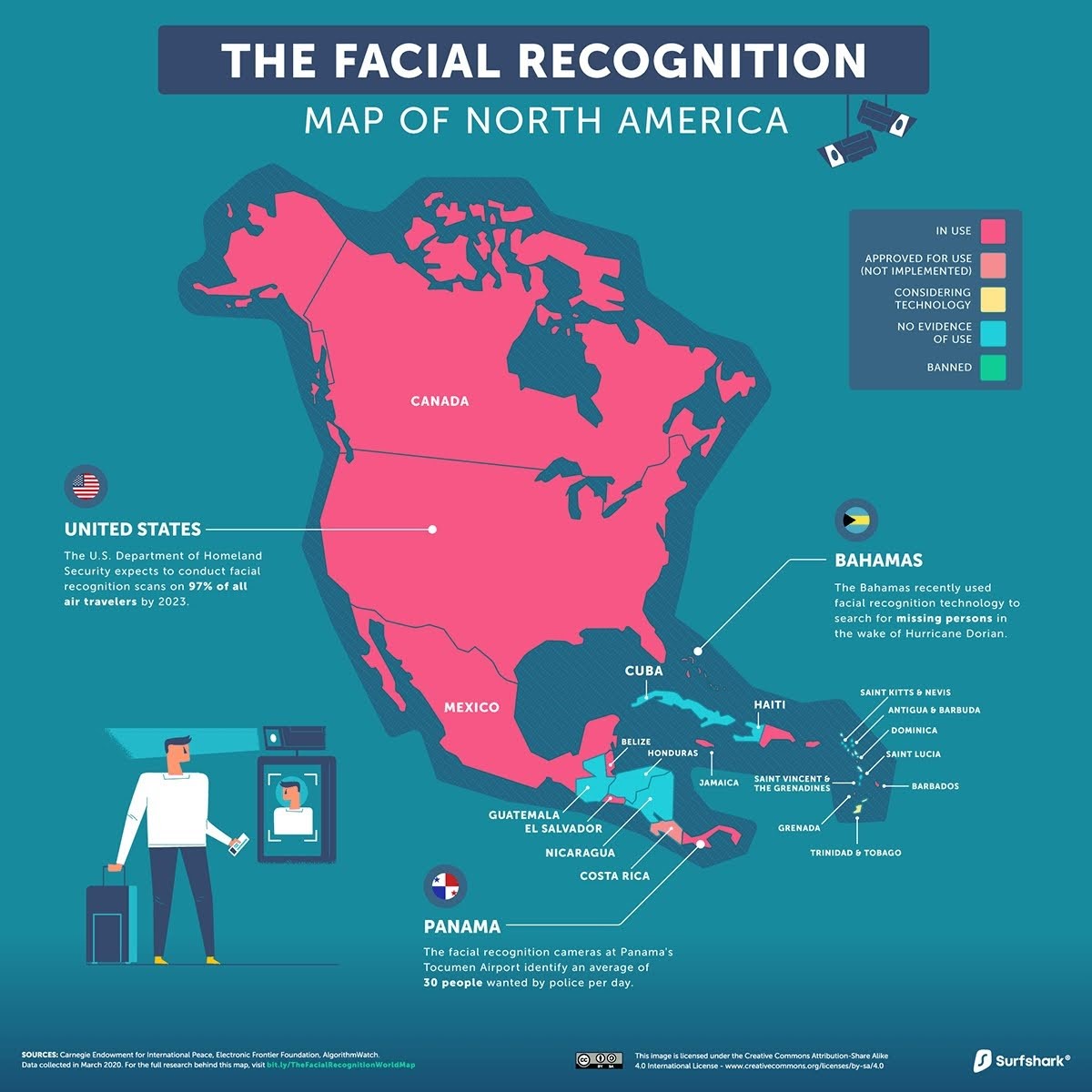 Image: Surfshark
Pam Greenberg wrote in NCSL that many Americans appreciate the convenience and security facial recognition technology offers. They are worried about companies and the government collecting personal data.
While in a survey of 2019 Americans said they trusted law enforcement to use facial recognition responsibly, recent events may have altered those perceptions for some. So, FRT acceptance is increasing in American market.
Brazil has immensely used this tech for tackle criminals. Brazil Interpol caught second most wanted criminal with the help of this technology. 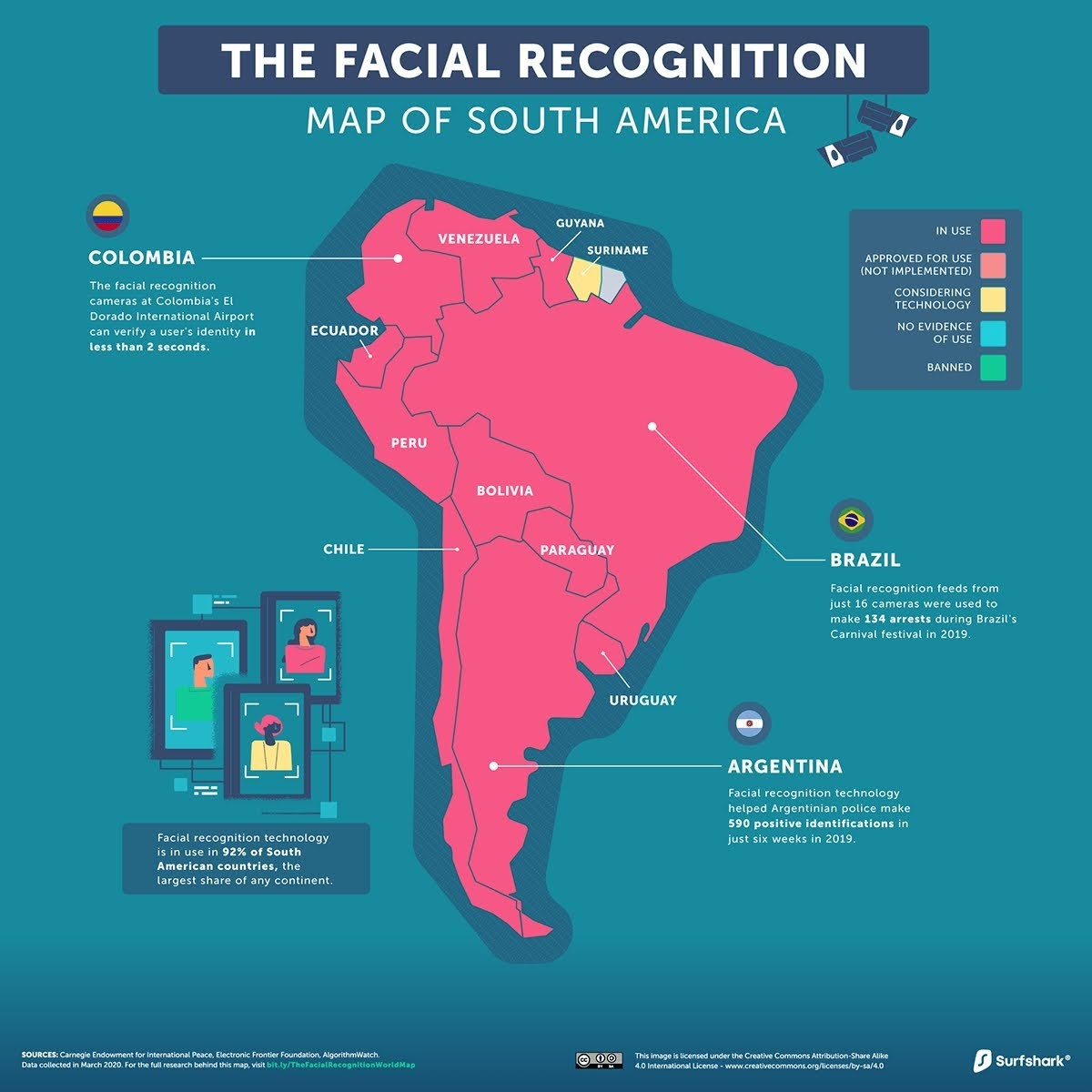 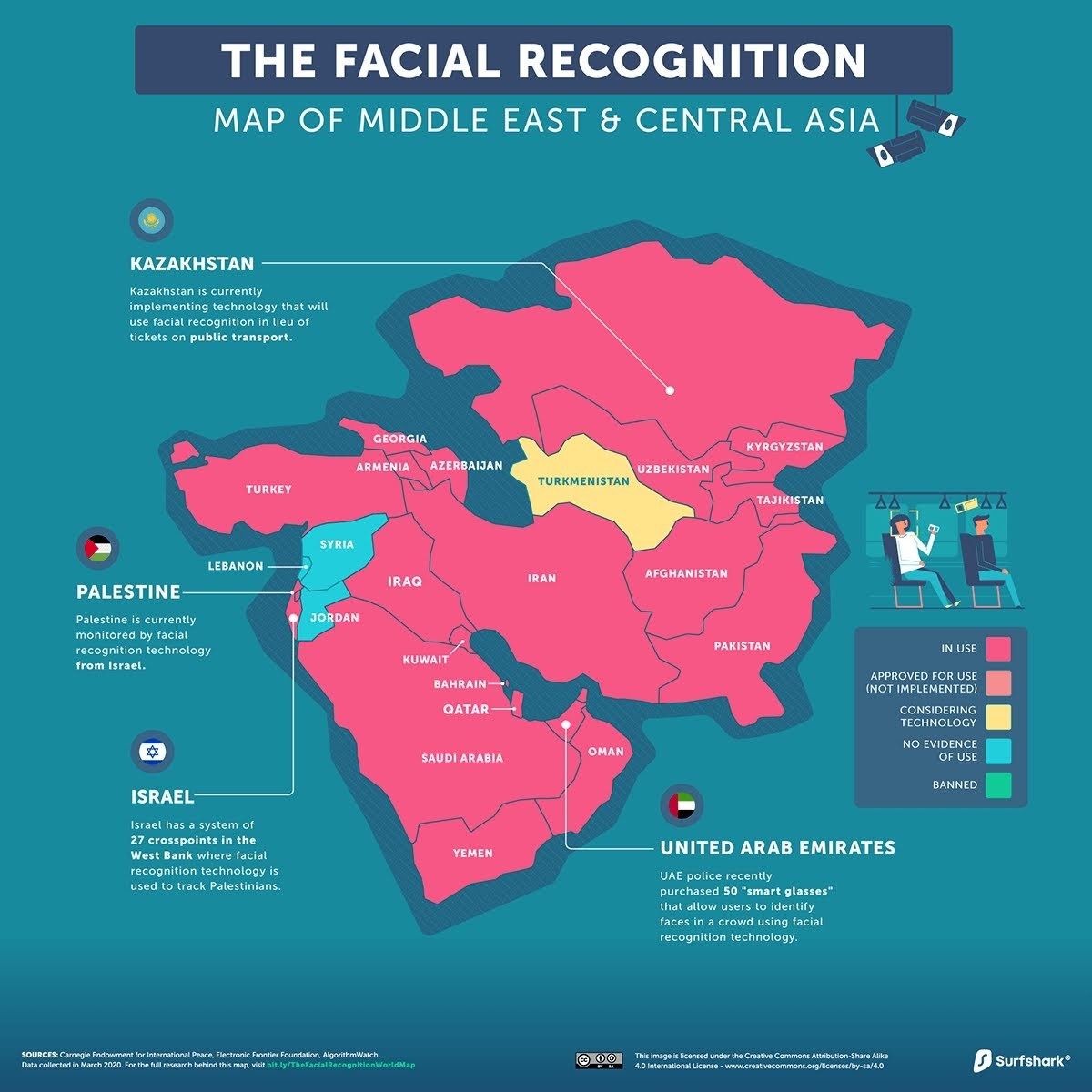 Image: Surfshark
UAE bought smart glasses to scan the crowd for various purposes. FRT may be used by Dubai Police in Law enforcement.
Israel, in the Arab world, keeping eye on West Bank with help of FRT. 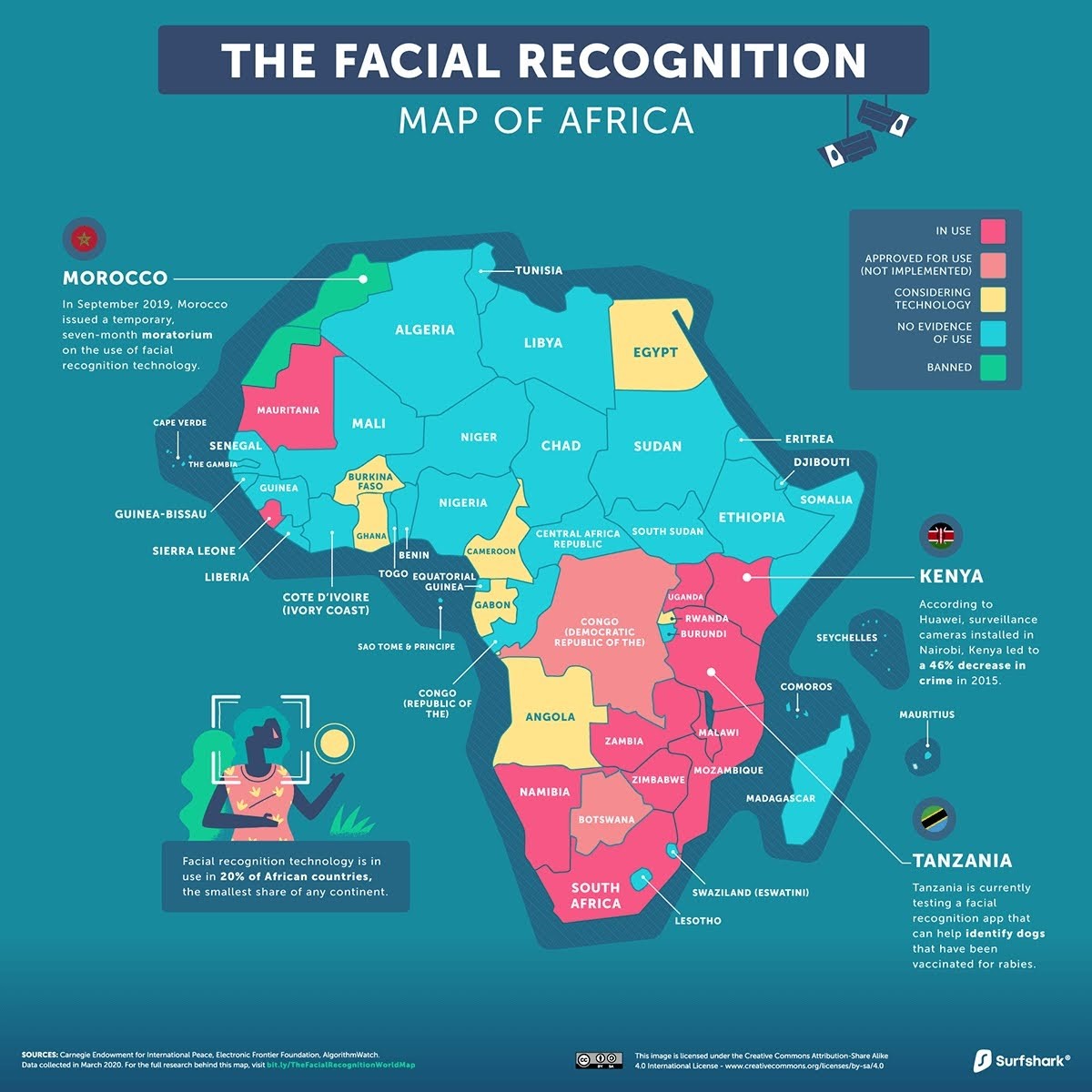 Image: Surfshark
China is helping Kenya &Uganda in implementing Telecommunication and Surveillance technology there by benefitting FRT.
According Paul Bischoff Survey
The top 10 countries with the most widespread have invasive use of facial recognition
In his survey, each country was scored out of 40, with higher scores indicating no or less invasive use of FRT and lower scores highlighting more widespread and invasive use. The following countries received the lowest scores:
Total score
score(inc. COVID Score)
Govt
Police
Airport
Schools
Banks/ Finance
Work Place
Russian Federation
9
10
1
0
1
1
1
United Arab Emirates
10
11
1
1
1
1
1
Brazil
13
15
3
2
1
1
1
Romania
19
21
1
2
1
1
1
Nigeria
25
30
1
5
1
1
1
Chile
12
13
1
1
2
2
1
Total score
score(inc. COVID Score)
Govt
Police
Airport
Schools
Banks/ Finance
Work Place
India
12
13
1
1
2
2
1
Japan
12
14
1
0
1
2
1
Malaysia
17
19
1
2
1
2
1
Taiwan
19
20
2
1
1
2
1
Thailand
20
22
1
2
2
2
1
Canada
21
23
3
1
1
2
1
Italy
21
23
2
1
2
2
1
Australia
13
14
1
1
1
3
1
Total score
score(inc. COVID Score)
Govt
Police
Airport
Schools
Banks/ Finance
Work Place
United States of America
18
20
2
2
1
3
1
South Africa
20
22
1
2
2
3
2
Germany
23
25
2
2
1
3
2
Uzbekistan
25
30
2
1
2
3
5
Kazakhstan
20
22
2
2
3
4
1
Table: Comparitech Get the data Created with Datawrapper
Key findings were:
Of the 99 countries surveyed, George Moody found following data:
Police forces access to some form of FRT
As stated above, nearly 70 percent of police forces globally have access to some form of FRT.
Five countries–China, Russia, Japan, Argentina, and Belarus–have invasive police use of FRT, as seen in survey of top 10 analysis. The majority of countries where police have no access to FRT are located in Africa.
However, many countries with the concept of Smart Cities will have access to the technology and/or Safe City schemes being implemented, many of these police forces may be granted access to the technology in the near future.
Summary
Facial recognition technology is a relatively new technology, but it is already finding wide adoption.  FRT is becoming a part of our everyday life, where the public discussion on privacy and security are undergoing a stage of evolution. With support from governments and organizations worldwide, adoption will continue to grow.
In a above-stated survey, users have a clear say about the contexts where they are willing to use FRT or not, which should be carefully considered by the government agencies and business entities while building a legislation or making a decision to expand or regulate the use of FRT.
As facial recognition technology develops ( liveliness recognizing capability), it will become more widespread in the world.
With all the hiccups, still the technology is getting accepted. As recognition percentage is going up, reaching as much as 99%, the day is not far when this technology will adopted with all the necessary compliance. As facial recognition technology becomes more widespread, it will bring benefits to people in various ways, including the ability to keep tabs on loved ones without waking them up. When the maturity level reached the dimension to go is to recognize or analyze behavior/mood pattern, till then Smile, you are on TV!!
Adoption Facial Technology

For any organization, employee turnover is of extreme headache. Here employee retention is a vital component of the growth of a business. Retention is not only important to…

How to increase Student’s Performance & Attendance by Quiz: Research

In the world of education, there are many ways of engaging students to find out what they have learned. From nursery to postgraduate one such method is conducting…

Human Resources (HR) is the part of your organization that helps you run your business. But for many small businesses, HR isn’t enough; they need help running their…

Tools Of Psychometrics For A Successful Entrepreneur 101: Tests

Psychometrics is the study of measuring things with precision, and it’s something we all have to do better as businesspeople. In other words, if you want to succeed,…

How to Use HR and Psychometrics for employees: Tests & Tips

Human capital is essential to a business. Without employees, there would be no business. The same is true for capital, which is why you want to find the…

How important is EQ IQ in HR – Reasons & Survey

The question, “What do you want your career to be tomorrow?” is something HR pros ask each other every day. Asking yourself that question can be deceptively challenging….